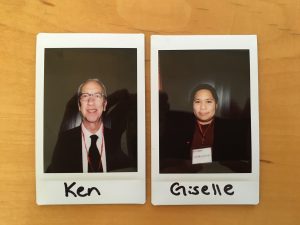 A successful mentorship depends on several key factors. To help our mentors and protégés get the most out of their mentorship experience, we reached out to a successful mentor/protégé pair for advice. Giselle General is a Volunteer Coordinator with the Edmonton Community Legal Centre with well-defined career goals. And her mentor, Ken Cantor, is an accomplished real estate developer and president of Primavera Development Group with projects that include the restoration of Brighton Block on Jasper Ave.

The pair met at interVivos’ Fall 2017 Mentorship Pairing Event and Ken chose Giselle as his protégé because “she stood out in the specifics of her goals. She is ambitious, well grounded, bright, open-minded, and organized.” Giselle chose Ken as her mentor because she wanted to “understand how our city works from his perspective as someone who has been around for much longer than [she] did, and from the perspective of the development industry.” Giselle explains that if she “were to pursue [her] goal of running for public office, [she] would like to meet people from different areas or industries that [she] currently [is] not able to.”

Giselle was not shy about sharing all that she has gained so far being mentored under Ken. “I have already learned so much,” she says, “how to re-structure my resume for different types of applications and acknowledging that not having answers is okay.”

To men who are hesitant about mentoring women because of the current sociopolitical climate, Ken has this to say:  “If you’re hesitant, maybe you shouldn’t, but my experience mentoring women is no different than mentoring men.  If the relationship is going to be successful, you have to work on it as equals regardless of gender.” Grateful to have such a successful mentorship experience, Giselle adds, “I think that both parties have so much to learn from mentoring someone from the opposite gender. Interestingly enough, in our case, our ‘differences’ are beyond just gender. We are from different ethnicities, we grew up in different countries, and so much more. If both parties are willing to have thoughtful conversations, and they listen to understand, it will be a very positive experience.”

Giselle and Ken are enjoying their interVivos mentorship experience so much that they plan to continue their mentor/protégé relationship past the 6-month end date. For anyone looking for advice from a seasoned pro or to expand their professional network in a meaningful way, the interVivos mentorship program is the answer for you.

Thank you to interVivos intern, Christy Seville, for writing this blog. Christy is currently wrapping up her Public Relations, Advertising and Applied Communication Diploma at MacEwan University.